The website uses cookies, which are text files placed on your computer. Some of these are essential to the site's operation while others analyse how visitors use the site. These cookies are set by default but you can disable them or view more information about how they are used Read More
Accept All Cookies ACCEPT ONLY ESSENTIAL COOKIES

Water is a fundamental building block of modern life, and new technologies are helping confront issues of water scarcity in the UAE and the wider region.

Sheikh Zayed, the UAE’s Founding Father, understood the importance of water security and limitations of the region, such as low precipitation and soil with limited water-holding capacity. He established an independent water and power producer – or IWPP – system, which established a robust desalination market. Now, 42% of the UAE’s potable water comes from 70 major desalination plants.

However, desalination is not new to the region. In fact, it dates back to 1928.

Saudi Arabia’s King Abdulaziz Al Saud introduced an early method to Jeddah, consisting of two distillery units and a submerged tube process. Oil exploration in the 1950s and the resulting growth in population across the region led to a greater demand for water. Desalination quickly became a viable solution to meet rising water needs. Following Saudi Arabia’s lead, Kuwait became the first country to test and implement a multiple steam technique in the 1960s that many Gulf countries still use today.

The spike in oil prices in the next decade resulted in more funds being available for large-scale investment projects. With the successful implementation of early seawater desalination projects, the sector began gaining more traction in the 1980s that has carried on to this day.

Reverse osmosis remains the primary technology used in desalination, which removes salt from the water by forcing it through a filter. These plants are evolving to create further reductions in energy usage as well as costs.

Today, the region is tackling the looming water crisis head-on with a bold approach to water management. In 2015, the Abu Dhabi National Energy Company, known as TAQA, completed the expansion of its reverse osmosis plant in Fujairah, making it one of the largest facilities of its kind in the Middle East. In addition, the country unveiled in 2017 the comprehensive Water Security Strategy 2036 that covers the supply chain with a focus on water management.

Others in the region have also begun implementing similar programs. This year, Saudi Arabia introduced such an initiative aimed at reducing water consumption by as much as 43 per cent by 2030. The Kingdom has also recently inaugurated one of the world’s largest reverse osmosis plants in the Shuaibah complex, with more projects on the horizon. 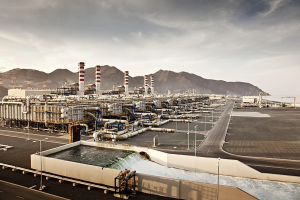 Entities in the UAE are using renewable energy such as solar power to remove brine from seawater. In 2013, the UAE launched a pilot program at Ghantoot using this technique that could save up to 75 per cent more energy than conventional desalination methods.

The country is also testing a technology that uses algae to absorb salt from water while other methods, such as using graphite, may offer the potential to transform the industry. But for these technologies to succeed, they will need to be adopted on a larger scale.

These are the types of projects that will help create a more sustainable, energy-efficient water supply for the Middle East. And it is not just in our region – globally, the water industry accounts for four per cent of electricity consumption and is expected to double by 2040. Decoupling power and water generation in the desalination process has the potential to not only increase operational and energy efficiencies, but also add sizeable cost savings.

The region – particularly the UAE – is well-positioned to lead this change with a growing economy, innovative government and as an emerging technology hub. Power and water supply companies are well-positioned to test and deploy these technologies and are ready to meet that challenge head-on.

Providing safe and sustainable access to clean water is perhaps one of the greatest challenges of our time – and with five billion people confronting water scarcity by 2050, there is an urgent need to develop a more reliable water industry. Which is why we forecast a broader and deeper adoption of these technologies across the region in the coming years.

The value that this will have on our lives is immeasurable, but what is clear is that many communities need to be better served. Despite the existing challenges, the next few years look to be promising for the expansion of water management and the sector’s technologies as a whole.

This piece was originally published in The National