Mubadala and TAQA Group to Invest in Power Sector in Uzbekistan 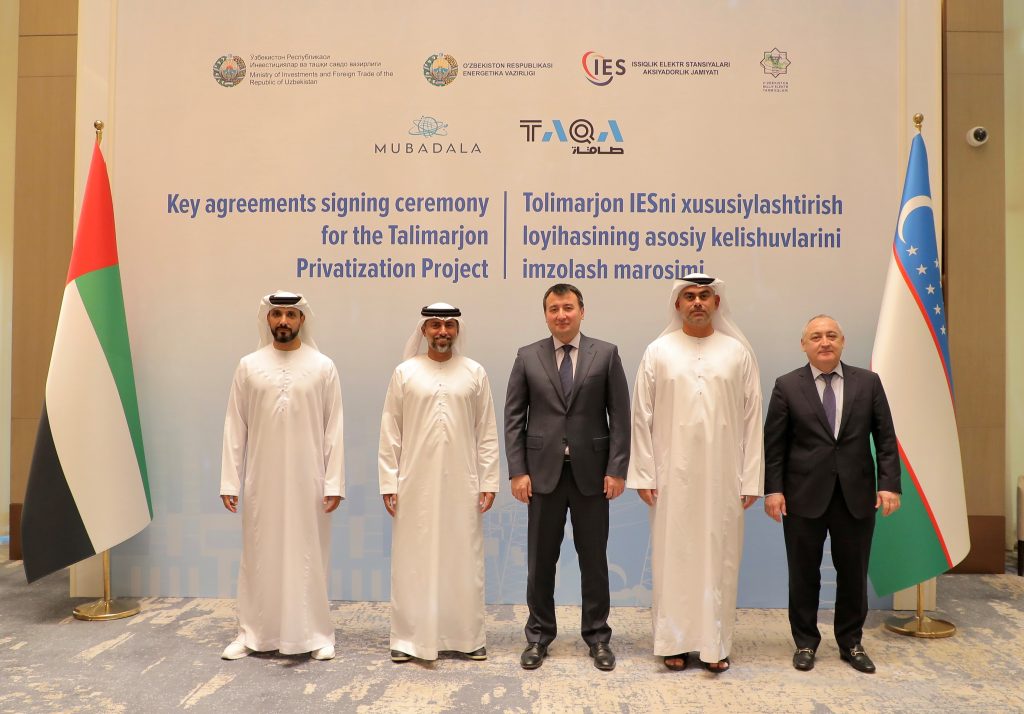 The binding agreements will see Mubadala and TAQA each acquire a 40% stake in two gas-fired power plants with a combined capacity of 1.6 gigawatts (GW) and the assumption of associated operations & maintenance activities. The Talimarjan Issiqlik Elektr Stansiyasi JSC (TIES) will retain the remaining 20% stake in each plant.

The transaction remains subject to the satisfaction of certain conditions precedent, including obtaining any applicable regulatory or other approvals. Completion of this transaction is expected to occur during the second half of 2023.

His Excellency Eng. Suhail Mohamed AlMazrouei, Minister of Energy & Infrastructure of the United Arab Emirates, commented: “The United Arab Emirates continues to be a leader in providing secure and sustainable energy across the world and is actively investing in markets where it can leverage its expertise to create value for all stakeholders. The strategic partnership between the Government of Uzbekistan, TAQA and Mubadala will serve as a vehicle for collaboration for both countries and will create a path for future growth and investment opportunities. I would like to congratulate all parties involved in this milestone agreement.”

Khaled Abdulla Al Qubaisi, Chief Executive Officer, Real Estate and Infrastructure Investments at Mubadala, said: “As a global and responsible investor, Mubadala is focused on supporting energy transition across the world. We are confident our partnership will contribute to Uzbekistan’s greater energy stability while preparing for a low carbon future. We look forward to working with TAQA, the Ministry of Investment and Foreign Trade and JSC Thermal Power Plants to advance the country’s energy ambitions.”

Farid Al Awlaqi, Executive Director of Generation at TAQA Group, commented: “This major investment in a new country is an important step forward in the delivery of the 15GW of new international capacity we announced as part of TAQA’s 2030 growth strategy. Investment alongside Mubadala in these power plants means we will become a major generator in Uzbekistan. The deal also significantly expands our operation and maintenance activity, another key part of our strategy.  Once the deal is complete, we will bring experience and expertise from our generation fleet around the world to help deliver the best possible performance from these plants.

“Now more than ever the health, wealth and success of every nation depends on reliable, efficient supplies of electricity and we are determined to play our part in providing that in Uzbekistan as we do in every country where TAQA operates.”

The agreements follow the 2020 agreement with Uzbekistan’s Ministry of Investment and Foreign Trade, and JSC Thermal Power Plants of the Republic of Uzbekistan (JSC) relating to the proposed acquisition, development and operation of the Talimarjan Power Complex.