The website uses cookies, which are text files placed on your computer. Some of these are essential to the site's operation while others analyse how visitors use the site. These cookies are set by default but you can disable them or view more information about how they are used Read More
Accept All Cookies ACCEPT ONLY ESSENTIAL COOKIES

A partnership on a green hydrogen to ammonia project on this scale between TAQA and Abu Dhabi Ports, would be a significant step towards placing Abu Dhabi at the heart of a new emerging global market for green energy. 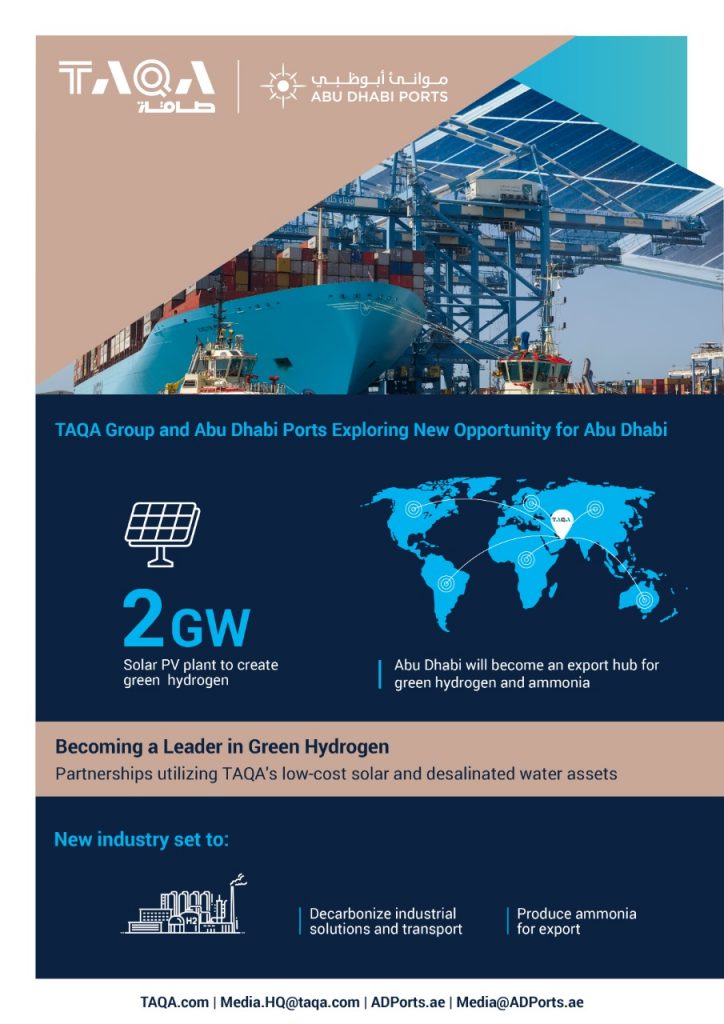 Under an MoU signed today by Jasim Husain Thabet, TAQA’s Group Chief Executive Officer and Managing Director and Captain Mohamed Juma Al Shamisi, Group CEO, Abu Dhabi Ports, the companies will work together on developing proposals for a green ammonia export facility to be based in Khalifa Industrial Zone Abu Dhabi (KIZAD). The new plant would be fuelled by hydrogen produced by an electrolyzer facility paired with a 2 GW solar photovoltaic (PV) power plant. The green hydrogen would be turned into liquid ammonia to supply ships converted to use ammonia as a bunker fuel and for export from Abu Dhabi Ports via specialized gas carriers. Ammonia, which is relatively easier to transport than pure hydrogen, has a number of industrial uses and can also be easily turned back into hydrogen.

The TAQA-Abu Dhabi Ports project will also feature a storage facility at Khalifa Port, opening the opportunity for it to become a hub for exporting green ammonia to international markets including Europe and the East Asia. The solar farm, electrolyser and the ammonia production plant will be situated in KIZAD. The ammonia plant will have pipeline connectivity to the Khalifa Port storage facility enabling large volumes of ammonia to be directly delivered to the port.

Jasim Husain Thabet, TAQA’s Group Chief Executive Officer and Managing Director, commented: “Green hydrogen requires large-scale low carbon electricity production and desalinated water. TAQA is an internationally recognized leader in both of these. We are pleased to have opened discussions with our partner Abu Dhabi Ports on developing proposals for a major industrial scale facility that, if it goes ahead, would place Abu Dhabi at the heart of the emerging market for green hydrogen. Combining the global reach of Abu Dhabi Ports with the energy and water know-how and established technology partnerships of TAQA could open up exciting opportunities for both companies, for our shareholders and for Abu Dhabi.”

Captain Mohamed Juma Al Shamisi, Group CEO of Abu Dhabi Ports, said: “We are pleased to initiate talks with TAQA, a national champion in the field of diversified utilities and energy, for the potential development of an industrial scale green hydrogen to ammonia export facility. This potential collaboration aims to address regional and global green energy needs, as well as supporting the goal of our nation’s leadership to position Abu Dhabi at the heart of the new emerging green energy market.”

He added: “With its strategic location between the East and the West, its proximity to KIZAD and Zonescorp, as well as the multimodal connectivity through sea, air and land linking Abu Dhabi to global markets, Khalifa Port is in an ideal position to become a major hub for green hydrogen and its derivatives exports to all international markets”.

Major economies around the world, including in Europe and Asia are investing heavily in decarbonization including in industry, global logistics including marine transport, heavy good vehicles, buses, trains and heating systems. Green hydrogen  can be used to power fuel cells or burned without emitting carbon dioxide and will play an increasingly important part in enabling our low carbon future.