TAQA delivered a strong performance underpinned by its stable contracted and regulated utilities business and buoyant commodity prices. Highlights for the period include: 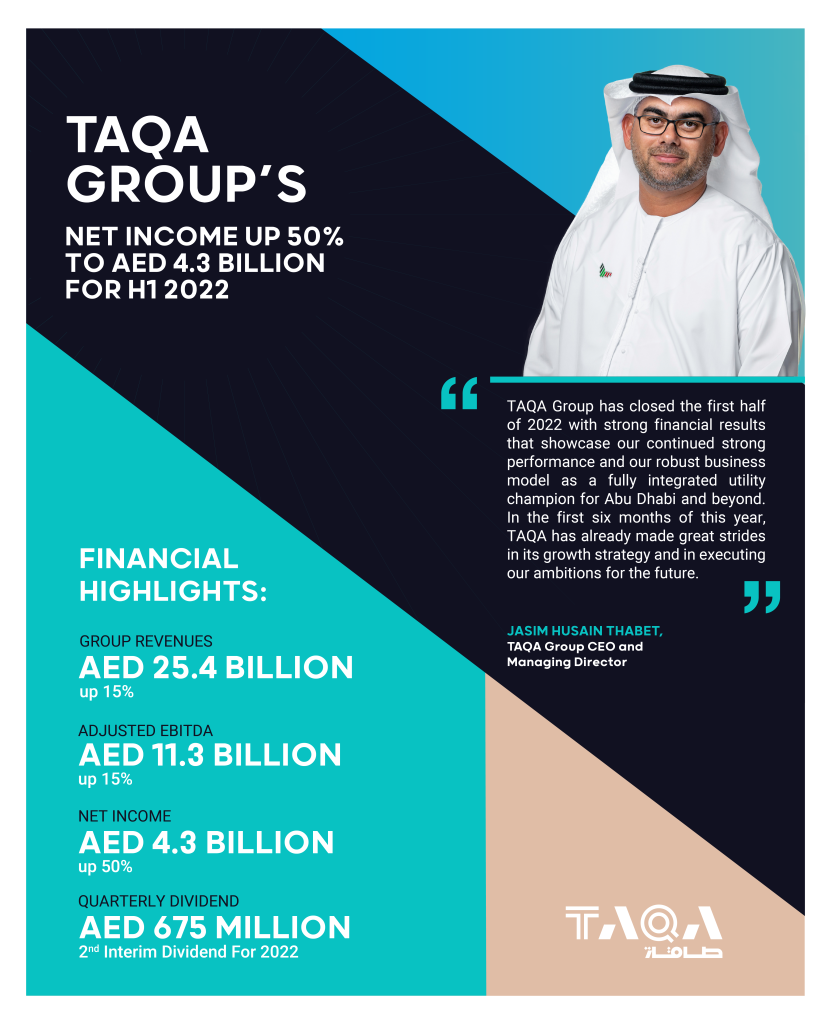 Upon approving the period’s financial results, TAQA’s Board of Directors also declared an interim cash dividend of AED 675 million (0.60 fils per share). This will be the second quarterly dividend payment planned for the financial year of 2022, in line with the Company’s dividend policy.

H.E. Mohamed Hassan Alsuwaidi, Chairman of TAQA Group, commented: “TAQA Group has continued to deliver on its growth ambitions to be the low carbon power and water champion of Abu Dhabi and beyond, and this is reflected in its results for the first half of the year. Notably, we have made progress on our clean energy journey having entered into binding agreements for the acquisition of a stake in Masdar. The transaction between Mubadala, ADNOC and TAQA will create a global clean energy powerhouse that consolidates renewable energy and green hydrogen efforts under a unified brand and further accelerate TAQA’s growth trajectory. The partnership also sets out to transform the energy landscape both in Abu Dhabi and on a global scale, supporting the country’s own ‘Net-Zero by 2050 Strategic Initiative’ and cementing its role as a leader driving global energy transition efforts.”

Jasim Husain Thabet, TAQA’s Group Chief Executive Officer and Managing Director, commented: “TAQA Group has closed the first half of 2022 with strong financial results that showcase our continued strong performance and our robust business model as a fully integrated utility champion for Abu Dhabi and beyond. In the first six months of this year, TAQA has already made great strides in its growth strategy and in executing our ambitions for the future.

“Highlights for the first half include the issue of our first green bond linked to Noor Abu Dhabi for international investors and launched our second sustainability report with interim emissions targets for 2030 to be articulated later this year. In addition, we announced that we expect to acquire a stake in EGA’s power assets, increasing our UAE-based capacity to more than 22 gigawatts, in line with TAQA’s growth strategy to increase domestic capacity to 30 gigawatts by 2030. We also listed nine TAQA-issued bonds on the Abu Dhabi Securities Exchange, an important milestone for local and regional investors and strengthening the Emirate’s debt capital market.”

The full set of financial disclosures can be found within the Investor Relations section on TAQA’s website.